The fact that the Harpers Ferry pistols were serial numbered has made possible tracking and compiling information about individual examples.  Two pistols sharing the same number has created some confusion while allowing collectors the possibility of discovering and, in very rare instances, matching up the original pair.  There have also been instances where the same gun has been observed on different dates and in different locations and mistakenly listed as the “other half” of a pair- with itself!  Over the years, some collectors have compiled lists of these pistols with information regarding their condition and where and when they were observed.  Samuel E. Smith (author and avid collector) may have been the first.  His list, begun in 1932, was the anchor and beginning of the list included here.  Bruce Congdon (more on Bruce below) continued Smith’s research and, after several decades of adding to it, was kind enough to share it with this author.  What is being written here is for those new to the martial pistol collecting fraternity as well as those veteran collectors interested in previously unpublished information regarding these firearms.

There are a few terms used here that bear some explanation.  A conversion or converted gun is one that has been modified or modernized to be a percussion weapon.  This was accomplished by removing the flash pan (either by cutting or grinding it off), attaching a percussion cap to the barrel (either by drilling a new hole in the barrel or by use of a right angle bolster threaded into the area of the original touch hole), and installing a percussion hammer.  However done, this procedure was fairly common and the converted weapons are interesting as they show historical methods to extend the useful life of a fine pistol.

A reconversion is a converted gun that has been “returned” to its “original” condition by having flint parts replaced on the weapon.  Unfortunately, there is no easy, non-invasive method of doing this.  There are some very good reconversions out there and one has to be very careful when researching or considering purchasing any flintlock firearm.  Much has been written about this subject and it is mentioned here only for purposes of explaining these terms. 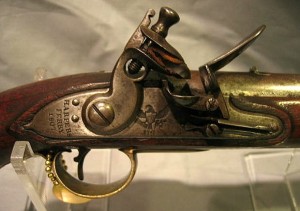 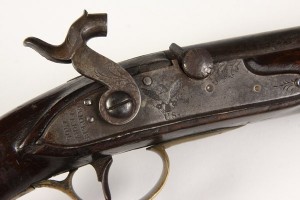 So, we have original pistols, converted pistols, and reconverted pistols.  If life could only be so simple!  There are all sorts of contradictions in condition and in the time line.  Apparently, major modifications and repairs made over fifty years ago have been accepted as “arsenal repairs” while more modern repairs and normal maintenance are considered by some as attempts at deception or bastardization of a weapon.  The most glaring example of this is the sequential serial numbers (which are on the barrels) and the lock plate dates.  It is quite common to see a gun with a lock date well into the serial number sequence of the year either before or after the numerical order of the actual serial number.  Serial number 1 has a lock date of 1807.  Of the existing pair of pistols serial numbered 11, one is dated 1806 and the other 1807.  Obviously, all three of these pistols were made in 1806.

One very common explanation for this phenomenon is that some firearm parts had been rejected by the inspectors and were held back, repaired, and used in a later weapon.  Another is that during use, some pistols were returned to the arsenal and repaired or scavenged for parts for other damaged guns.  Still another (not as historically intriguing or noble) explanation is that someone in the gun’s history had a couple of pistols, one with a very nice stock and barrel (perhaps even a conversion), and the other with a better lock.  Taking the best parts of the guns to make one really good weapon, and the others to make a less desirable but saleable pistol, the unwitting (or unscrupulous) person thus realized a net increase in value.

Also, there have been instances where auction houses and dealers erroneously stated that a pistol is a reconversion and it was later discovered that it was, in fact, an original unconverted flintlock pistol.  This situation is very unfortunate as the pistols are serial numbered, it can be very difficult to overcome the “stigma” of a mistakenly labeled reconversion.

For purposes here, the term “original flint” means that, in the opinion of the person describing the pistol, it is not a reconversion.  An “original flint” gun may have some replaced parts from normal use (screws, springs, or portions of the cock assembly, etc.).  Whenever possible, these items have been noted.  My experience is that the judgment of the people who contributed to this list is the best to be found.  Anyone who spends decades tracking and documenting these pistols to this level is a true expert.

On the subject of experts, no one individual possibly could have assembled the following information.  Bruce Congdon supplied the typed and hand edited (over literally decades) list that he assembled.  Referring to the original Sam Smith and Birdie Partridge lists, and adding to it as he found additional pistols, Bruce’s many years of diligent research were absolutely essential in the creation of this book.  Drawing from several publications, minutes of firearms associations, and auction catalogs, some of the data dates back to the 1920’s.

The single most quoted source for the list (Sam Smith) dates back into the 1930’s.  Mr. Smith started his list of Harpers Ferry Pistol serial numbers in 1932.  By 1968, he had 266 pistols listed.  Birdie Partridge, another voracious collector, collected and tracked these pistols contemporaneous with Sam Smith.  References are made to his list as well.  Also, other collectors (Don Stoops, Dave Prawdzik, and Norm Flayderman to name just three) greatly aided in the interpretation of data for this book and the comments following the list.

Having tracked and researched these pistols for several years now, I feel that I have become well acquainted with their history and nuances of construction.  Having met and spoken with the foremost collectors and dealers of these weapons, I feel very confident stating that the man who assembled the list from which the following is derived, Bruce Congdon, is among the most knowledgeable experts on these Harpers Ferry Pistols alive today.  His list was a actually compilation of many lists, Sam Smith, Frank Klay, Jim Wertenberger, Doc Peterson, Birdie Partridge, John Prawdzik, and his son, Dave Prawdzik (and, I am sure, many others who I only wish I could name here).  What impresses me most about Bruce is that he will reserve any judgment regarding a pistol until after a great deal of examination (always under magnification) and his comments are always extremely polite and well thought out.  Recently I have had the pleasure of getting to know Dave Prawdzik, and he and I have become extremely good friends and regularly compare notes and share information regarding these early Harpers Ferry firearms.  Dave and Bruce have been extremely generous in sharing their knowledge and experience.  They have saved me from making more than one mistake in acquiring pistols myself!

Without limiting the rights under copyright reserved above, no part of this excerpt may be reproduced, stored in or introduced into a retrieval system, or transmitted, in any form or by any means (electronic, mechanical, photocopying, recording or otherwise), without the prior written permission of both the copyright owner and the publisher of this book, except for the inclusion of brief quotations in a review.