These handmade (by master gunsmith artisans) pistols are among the most sought after firearms in the collecting world.   Among many distinctions the M1805 Pistol was the first U.S. Marshall flintlock pistol manufactured at a U.S. arsenal.  These firearms were only made at the Harper’s Ferry Arsenal- and just over four thousand were made in the three years of their manufacture.

This pistol was the inspiration behind the U.S. Army Military Police symbols such as the Regimental Crest, the MP Distinctive Unit Insignia, and MP collar brass.  The aesthetics of these half stocked pistols are considered by some as the most attractive ever made. 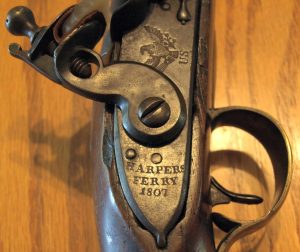 Original unconverted to percussion or reconverted to flint examples of this very rare pistol have become extremely difficult to find.  The M1805’s were the only pistols made at Harper’s Ferry and were only made from 1806 through 1808.  This example was manufactured in 1807 and is in original, unmodified condition.  Unlike many M1805’s this pistol has exceptional distinct and crisp markings.  Harpers Ferry Model 1805 Pistols rarely come up for sale, and when they do, command very high sales prices.

From the Rick Hudak collection, this pistol would make a fine addition to any martial arms collection, or a stand-alone heirloom.  This exact pistol is included, with photos, on page 68 of Harpers Ferry Arsenal and Joseph Perkin; the Classic Arms of the Early Years.

This Harpers Ferry pistol is a true investment grade 210+ year old U.S. Martial pistol and an extremely rare opportunity.  Arms from this collection almost never come up for sale.  A wonderful opportunity for the discriminating collector.